Birds and other vertebrates are well known hazards to aviation at airports. The threat of invertebrates, like wasps, is less understood. Our Managing Director Phil Shaw and former Principal Ecologist Alan House wrote a scientific paper on a 39 month study at Brisbane Airport. The study assessed the risk to flight safety by the mud-nesting keyhole wasp (Pachodynerus nasidens).

Why are they a problem?

The keyhole wasp views aircraft pitot tubes as an attractive nesting opportunity and therefore blocking the tube. Pitot tubes measure airspeed, and blockages cause faulty measurements. This could lead to catastrophic outcomes.  In this experiment the tubes were covered to see if this reduced nesting.

A risk analysis was done to assess costs of safety, reputation, financial loss, injury and illness events with  increasing severity to aviation. Climate modelling also showed the possible spread of the keyhole wasp in Australia. Risk was greatly reduced when 33% to 75% of tubes were covered on arrival of the aircraft at the airport.  This is significant when the cost of wasp management on airport is set against the costs of an aircraft incident. The paper also looks at eradicating the keyhole wasp and its spread to areas in Australia with a suitable climate and considers the significant risk the species presents to aviation. 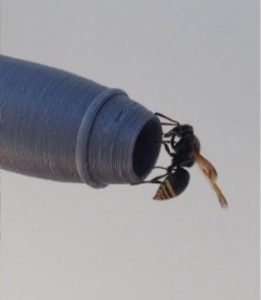